Hunting Helpers in Monster Hunter Rise (MHR or MHRise) are a special type of Endemic Life that hunters can encounter during quests. These creatures can be captured and placed into the Helper Cage, from which they can be used like items until the end of the quest. As the name suggests, Hunting Helpers provide a hunter with utility and aid during their hunts, calling on each helper's unique abilities which range from healing, driving off monsters giving chase, inflicting elemental blights and many more.

Insects with sharp horns that live in colonies affixed to tree branches. If attacked, their horns will stick out in a defensive position.

A snake with an unusually developed neck region. Its body is filled with an antidote that works on various poisons.

This round rabbit may appear cute and fluffy, but its furry coat is actually made of mold. By allowing bacteria to grow on it, it gains an increased amount of nutrition from its food.

A large snail with a green shell. It stores fluids with healing properties in its body.

A tiny beetle that pushes around different elemental environments.

A spider with a distinct yellow-spotted pattern. It shoots out a sticky web from its abdomen that is robust enough to restrain monsters.

A pheasant with a giant red vocal sac. It sounds like a crying child, which it uses to attract large monsters that will, in turn, distract its predators.

A type of weasel that releases a special, smoke-like pheromone when used, allowing it to attract nearby large monsters.

A large toad that has a distinct color. 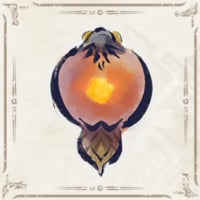 A glowing caterpillar that secretes a sticky fluid to attach leaves or wood to its body, making it look large. This body fluid is highly volatile, and applying shock to it will cause it to explode in self-defense. When worn, it detonates when struck, mitigating some damage to the wearer. 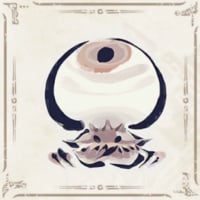 A terrestrial crab with mushrooms on its body. When attacked, it rustles its shell, causing the mushrooms to expel spores, which it uses for protection. It also feeds on insects that are attracted to fungi, forming a mutually beneficial relationship. The eyeball-like mushrooms on its back are extremely bitter and not suitable for consumption. 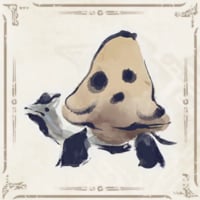 A large tortoise with an anthill on its back. If you capture it, the anthill absorbs damage for you when you take a fatal blow. Aurortles and the ants that reside in the anthill have a symbiotic relationship where the ants protect the shell with their hill, in exchange for the tortoise's food scraps and excrement.