Goss Harag is a Large Monster that appears in Monster Hunter Rise (MHR or MHRise). Large Monsters like Goss Harag are hostile and are usually the primary objective of Hunts. They provide valuable Materials when defeated.

Run! Run!
The beast is on its way!
From the snowy depths
It comes to find its prey
With its chilling breath
It forms a blade of ice
Then it goes out hunting
For something to excise
One wrong step
And it's too late
The beast hears all
Returns irate

A monster native to ice-cold climates. Covered in fur so thick it keeps out the harsh frost, it roams the snowy plains in search of prey. It can inhale the cold air to freeze its own bodily fluids and then spit them out to create icy blades on its arms. When riled up, the Goss Harag turns red and becomes exceedingly dangerous.

In hitting the accumulated frost on its forelegs, a hunter risks being afflicted with iceblight, but is rewarded by the creature being toppled when the frost is shattered. Areas that appear red when the creature is angry are the most susceptible, so focus your efforts there!

Claw Scrape - Goss Harag stabs one hand into the ground on its side and scratches the ground in an arc in front of it. Dodge backwards or to the opposite arm to avoid this.

Backhand Sweep - Goss Harag raises one arm towards the opposite shoulder and spins 180 degrees as it performs a backhanded sweep. It repeats this move to return to its original orientation. A direct hit deals moderate damage and knocks players away. Dodge backwards to avoid.

Double Slash - Goss Harag raises both arms briefly and then follows up with two quick swipes with each claw. Each swipe comes from a high position and can easily be dodged under, moving towards the monster's sides.

Ground Pound - Goss Harag quickly punches the ground in front of it and then slowly winds up for a second punch, dealing heavy damage and knocking players down. Getting hit by either punch will impose a longer recovery time and it is recommended you Wirefall away to avoid follow-up attacks. Goss Harag will sometimes leap towards hunters during the first punch. Roll towards its side to avoid either hit.

Tackle - Goss Harag postures by lowering its shoulder and performs a short dash forward. Deals light damage and can knock players away.

Charge - Goss Harag postures similarly to a tackle with a slight wind up and then charges towards its target and then powerfully swiping in a 180 degree motion. Has a very soft lock-on and is easily dodged but the claw swipe has a much wider hitbox than it appears. It is best to dodge before the swipe.

Head Butt - Goss Harag shuffles backwards slightly as it lowers its head, and then rams it at players. Deals light damage and can knock players down. Dodge under its arms and to the side.

Fissure - Goss Harag pounds the ground with both hands, sending rocks and debris jutting out of the ground in a straight line towards its target. The attack has a narrow hitbox and can be sidestepped. When enraged, Goss Harag may first disengage by leaping away a good distance and creating the fissure as it lands.

Enrage - When going enraged, Goss Harag lets out a loud roar as its face and limbs turn a bright red color. It will then gain access to its ice weapons and a whole set of new attacks.

Ice Breath - Immediately after enraging, Goss Harag will disengage by leaping away a great distance and then breathing out two long beams of ice. The first breath will follow a vertical pattern going from bottom to top while the second is a very wide horizontal sweep from one side to the other. As a rule of thumb, whenever Goss Harag begins enraging, you should sheathe your weapon and sidestep the vertical beam and then immediately perform a vertical Wiredash to avoid the horizontal beam. You can Wire hang in the air by pressing

in case you of a premature jump. Goss Harag will always follow this move up by breathing onto its arms and creating a set of Ice Weapons. If its Ice Weapons are removed while Goss Harag is still enraged, it may perform the Ice Breath sequence again within one enrage window.

Ice Weapons - Goss Harag breathes onto its arms, creating a set of deadly Ice Weapons, increasing both its damage and reach as well as granting access to new attacks. Goss Harag will always form its Ice Weapons after using its Ice Breath attack, but may also perform a much quicker, standalone version without the Ice Breath if it loses its weapons but remains in the enraged state. It will also perform the standalone version when it switches areas while remaining enraged. Goss Harag's Ice Weapons comes in three configurations depending on its state: 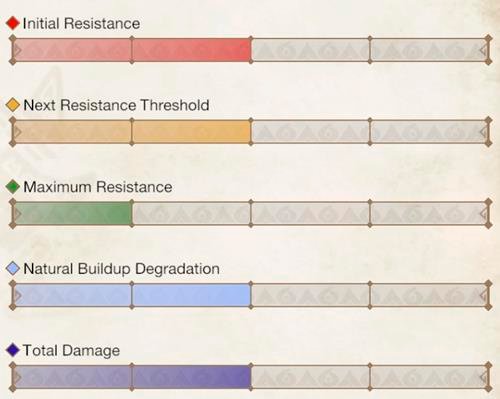 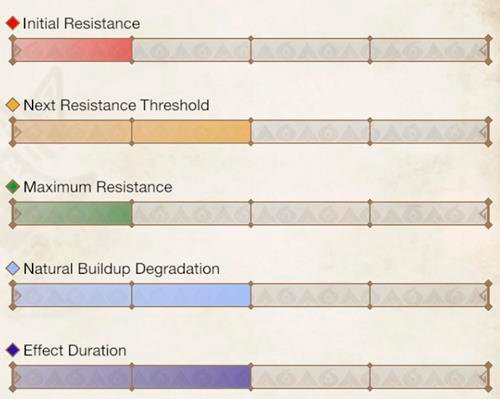 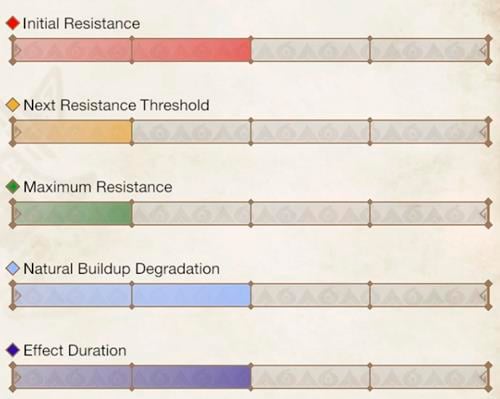 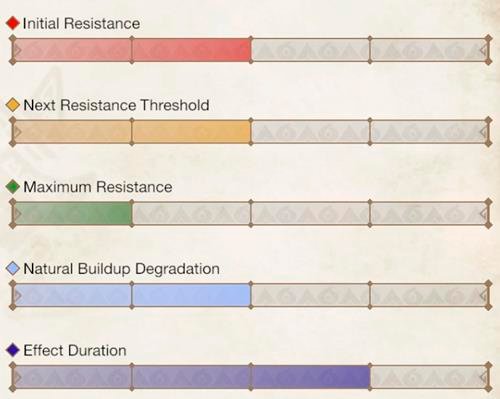 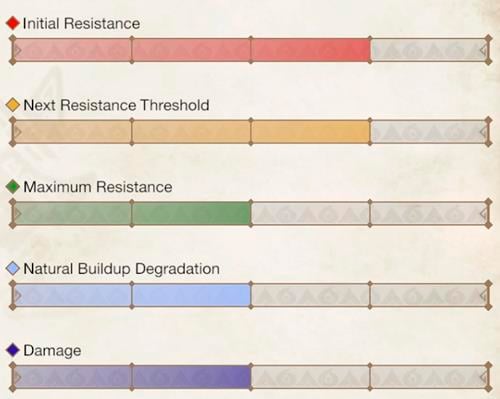 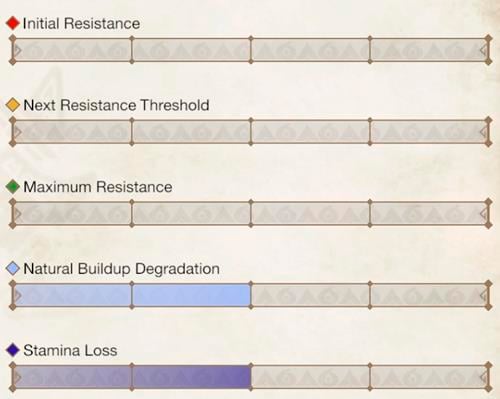 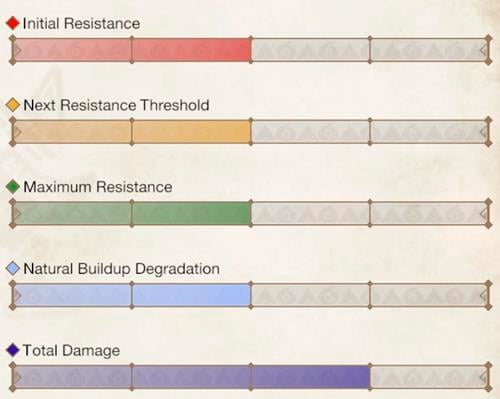 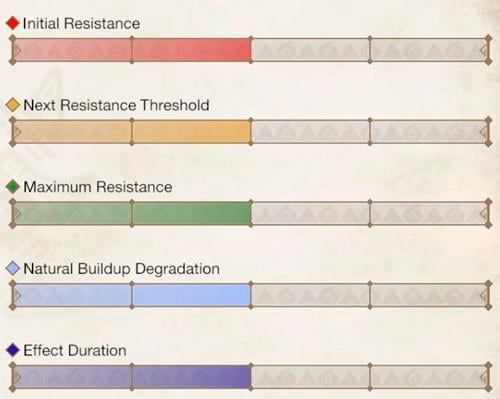 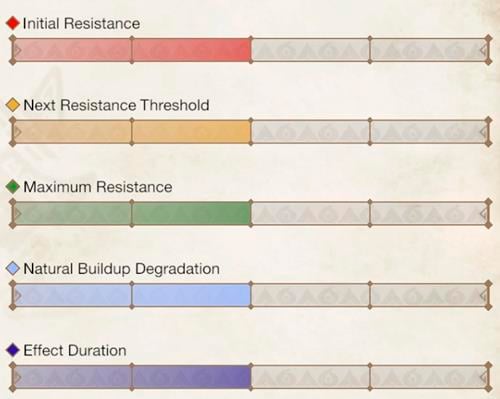 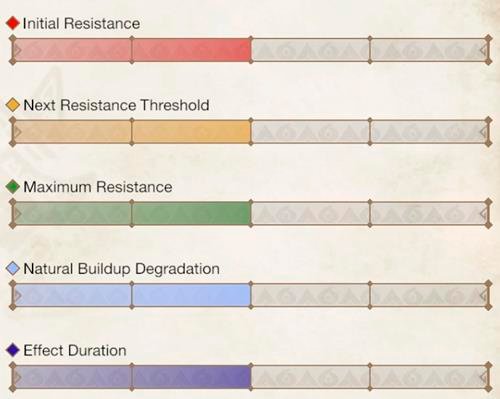 The tables below contain information on the materials that can be obtained from the Low Rank, High Rank and Master Rank variations of Goss Harag. This information is specific to MHRise.

The table below indicates the various materials obtained from the Master Rank variation of Goss Harag and the drop rates for each.

The table below indicates the various materials obtained from the High Rank variation of Goss Harag and the drop rates for each.

The table below indicates the various materials obtained from the Low Rank variation of Goss Harag and the drop rates for each.

The following are weapons and armor sets related to Goss Harag. This information is specific to MHRise.

The following are Palico and Palamute weapons and armor sets related to Goss Harag. This information is specific to MHRise.