Anomaly Investigations in Monster Hunter Rise (MHR or MHRise) are a new type of Quest which expands upon the Anomaly Quests introduced with the Sunbreak Expansion. While Anomaly Quests are special hunts against Monsters driven mad by the Qurio creatures encountered throughout the story, Anomaly Investigations take the same fundamentals, adding elements of increased difficulty, randomized quest parameters and brand new crafting materials to create an endgame progression system for hunters to continually develop as they continue to take on bigger challenges.

Like Anomaly Quests, the new Anomaly Investigations pit players against Qurio-afflicted Monsters — extremely powerful versions of Monsters, driven mad by Qurio bites. These Afflicted Monsters are much more aggressive and have a much higher health pool. Over the course of combat, these Monsters will absorb Qurio energy from the surroundings and enter the Delirious state, becoming even more powerful.

Anomaly Investigations push the envelope by providing players with randomized hunts, each with widely varying difficulty and experience, as well as introducing the new Anomaly Research Level. This is a new ranking system that works similar to the Hunter Rank and Master Rank, serving as a measure of progression within the new quest system and unlocking bigger challenges as hunters increase their level. Veterans of Monster Hunter World and its Investigation system should be familiar with these concepts, but for newer players or those looking for tips and tricks, this guide breaks down each element of the new Anomaly Investigations. 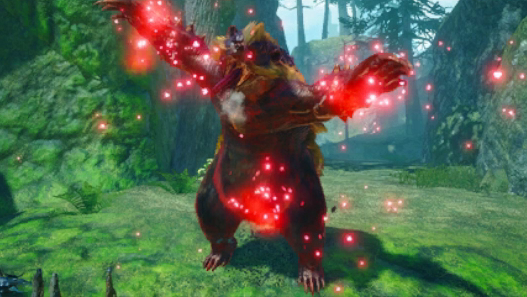 How to Unlock the Anomaly Investigations feature 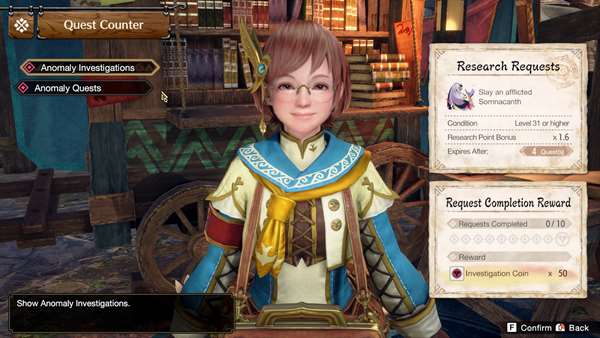 The Anomaly Investigations gameplay mechanic is unlocked as soon as you reach MR 10. This involves going through the main campaign and reaching certain milestones to progress your Master Rank.

Once this prerequisite is met, speak to Bahari in Elgado Outpost who will inform you of the new feature, and then Chichae who will have the new Anomaly Investigations category under the Anomaly Research Quests available at the Quest Counter.

Your Anomaly Research (AR) level is the overall measure of progression for the Anomaly Investigations quest system and can be viewed in the Hunter Info window in the menu. As you take on Investigations, you are awarded Anomaly Research Points which essentially function as experience points for your AR. Accumulating enough points will cause your AR to level up which allows you to take on bigger challenges. There are many methods to obtain points, with the main ones as follows:

Your current AR determines the maximum level of Investigations you can take on. There are ways to obtain Investigations higher than your current max but you may be restricted from tackling them until you reach the minimum AR required.

Depending on how much time you've previously put into Anomaly Quests and increasing your Master Rank prior to Anomaly Investigations being made available in Patch 11.0.1.0, you may begin the new quest system with a much higher level than normal. For example, players who have reached MR 100 and have spent a considerable amount of time farming Anomaly Quests may already be at AR 31 upon unlocking the Anomaly Investigations feature. 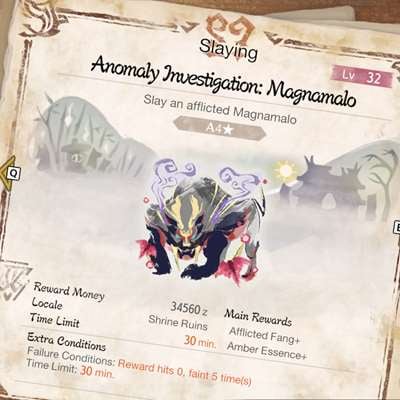 The combinations are endless and no two Investigations are the same.

When you begin Anomaly Investigations, you may have only a handful of quests available. There are a few ways for you to obtain more: 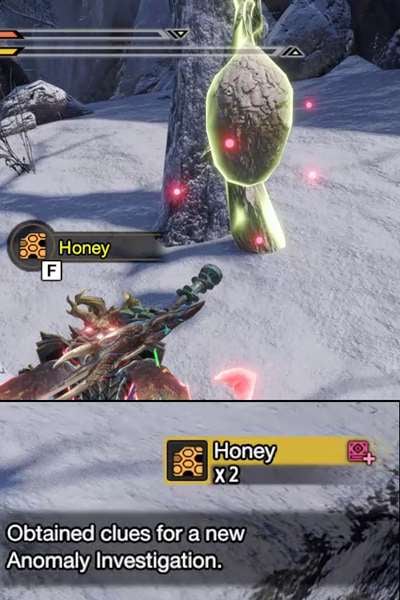 Lastly, during the intermission after slaying the final target of a quest and as the Return to HQ countdown commences, gathering from Afflicted nodes, breaking other Monster parts or slaying Wild Monsters will not award research points nor will they unlock new investigations.

Note that you are limited to a maximum of 120 Investigation quests at any one time. Obtaining more beyond this limit will automatically delete the oldest quests. However, if  there is a particular Investigation with quest parameters that you like, you can lock the quest in the Quest Counter interface to prevent it from getting deleted as a result of overcapping your investigation limit.

Just like with Anomaly Quests, completing Investigations, breaking parts and carving target Afflicted Monsters will award special Afflicted Materials which can be used in high-level Crafting of Weapons and Armor, as well as some Decorations. As you increase your AR and take on higher level quests, more materials become available with some of the rarest materials in the game only being obtainable through the Anomaly Investigations feature. Farming these materials is the key to the new Qurious Crafting system, which uses all Afflicted materials to futher enhance your equipment.

In addition to the farmable materials, completing Investigations will award

Investigation Coins — a new currency that can be traded in at the new Anomaly Research Lab facility run by Bahari in Elgado Outpost in exchange for some of the rarest crafting materials such as Monster Mantles and Gems. 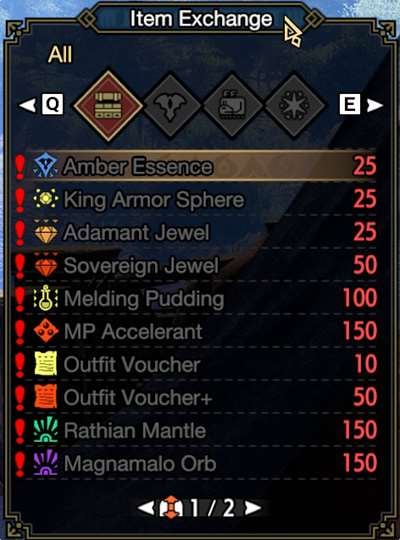 How to quickly raise your Anomaly Research Level

Leveling your AR can be a long and arduous process. However, there are some tricks you can use to rise through the ranks and take on bigger challenges.

The most important one is to always take on the highest level investigation you can for your Target Monster. The base Anomaly Research Point reward given upon completion of a quest is adjusted based on the level of the investigation. The higher the level, the higher the base points awarded. You can take this a step further if you have access to Online Multiplayer. Using the Online Quest Board, you can specify search conditions to search for quests within your level bracket. Because some quests are set at a higher level but can be taken on by players a few levels below, this is an easy way to take on quests a few levels higher than your current AR. Furthermore, this is an excellent way to take on quests for Monsters that you currently do not have investigations for.

If you are up to the challenge, taking on quests with less Time and/or Faint allotments will also add a multiplier bonus to the Research Points obtained upon completion of the quest. For example, taking on a quest that allows only two faints will multiply your points by 120%, deducted by 10% for every faint suffered. This is a great way for skilled players to maximize their point gain.

Finally, Bahari will put up Requests on specific hunts at the Anomaly Research Lab. 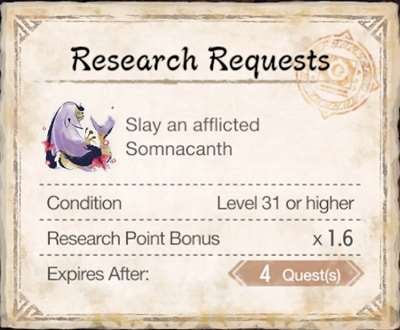 These are bounties on specific Afflicted Monsters which will multiply your Research Points at the end of the quest based on the current Bonus. There is also a condition that must be met in order for the request to count and to obtain the bonus. In the example above, successfully hunting an Afflicted Somnacanth of Investigation Lv 31 or higher will multiply the Research Point Bonus obtained by 160%.

Research Requests refresh after every few quests completed, rotating between different Monsters, conditions and bonus points awarded. This is denoted by the "Expires After" label. Requests can also be viewed at the Quest Counter.

How to obtain more Investigation Coins

Investigation Coins are a highly valuable resource that cuts back on a lot of RNG when farming for the rarest materials. However, obtaining them can take a very long time as each Investigation only awards 1 Coin at most. However, taking on Bahari's Research Requests can net you a lot of coins much faster. 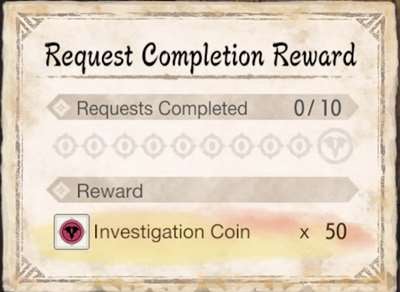 At the Anomaly Research Lab or Quest Counter, you will see the Request Completion Reward card under the current Research Request card. Completing 10 of Bahari's Requests rewards 50

Investigation Coins which is by far the fastest way to earn this currency. Therefore, it is very efficient to take on these Requests constantly, both to rank up your AR faster and obtain coins.